So I was going to write another post about the Real Housewives– this time about those ho’s from Jersey but I figured you guys might not be into that. Oh, I’ll still write about them. Just not back-to-back posts. I don’t want you knowing thinking I have nothing else going on besides watching Bravo. Besides, if this were about those Housewives the title of the post would be all wrong. I can’t imagine any of them not sucking in real life. I mean, we’re talking “women” who flip tables at family dinners and shout things in front of their kids like “Prostitution Hoo-wah!” Granted that was about the most hated Housewife in Housewife history but still. Even I know to censor myself in front of kids. Usually. By the way, Hoo-wah means “whore” if you’re not from Jersey. Oh crap, I wasn’t going to talk about them. Oh well. I feel bad because two of my best friends are from Jersey. One is even Italian. And they don’t act like this. Not even in college when tables got flipped with more frequency than birdies and hoo-wahs were your friends and neighbors. Sometimes roommates but that’s another story.

No, no, what I want to tell is about the super exciting thing that happened to me on Friday. My favorite author came to town! Jen Lancaster writes these hysterical, addictive memoirs and recently released her first novel. I only wish she would write faster because I’m nearly halfway through that novel and can not wait a full year for her next book. *Sigh*

Jen is the one of the reasons why my next book was late getting handed off to my editor. I was caught up in the Jen Lancaster Feeding Frenzy. Can’t. Stop. Reading. Her. Books. In fact I’m pretty sure my editor would have been there to tell her just that, maybe shake a fist in her general direction, if it weren’t for the fact that she’s about to have a baby and has forgone doing things in public for fear of water breakage and super speedy labor and deliveries that apparently only happen in movies. (I don’t believe it. I fully expect that to happen either to me or someone I happen to be with. I will never recover.)

Anyhoo, Jen did a reading, a Q&A and then signed about 407 books for her rabid female fan base. (My betrothed went as well as my buddy Rachael’s betrothed because they wanted to meet the woman who keeps us up laughing at all hours of the night. They were one of three guys there.) Rachael and I stood in line for about 3 days before finally getting a chance to meet Jen. OMG I was so nervous! For real! I had about 4 million things to say to her but really they’d be much better suited to us chillin’ in my living room with a bottle of Chardonnay and a Real Housewives marathon on TV. That was “Things to Say #82” in case you’re wondering.

I think what I was most nervous about is that Jen would be an asshole. Okay, not the asshole she says she is in her books. (And she’s not even really an asshole in her books. She just says and does the things we all wish we could.) I even had a copy of Confessions to give her but feared that would come off as cheesy, inappropriate or just down-right weird. Rachael and the pile of gifts covering the table from the fans that came before me convinced me it wasn’t. I mean, it’s already published. It wasn’t like I was hoping she’d start up her own imprint and sign me on as client. (Although I totally would.)

The bookstore lady (who was wearing these fabulous green shoes) took our books and ushered us up to the gift covered table. Rachael went right over and shook her hand. I took this weird meandering route which landed me square in front of her holding nothing but a box of hot, smelly leftover sushi.

“We brought you leftover sushi,” I said to Jen. “Which is the custom here in the Pacific Northwest.”

Poor Jen looked at me with a mix of confusion and Screw the Pacific Northwest. I ain’t taking your smelly-ass sushi!

“Just kidding!” I said. See? I get weird and stupid and inappropriate when I get nervous. Did I ever tell you about the weird, stupid things I said to my vet when my dog had to be put to sleep? Horrible!

I’m not sure what happened next. I think we got a picture taken with her. She smiled. Looked happy to be there even though we were probably persons 401 and 402 in line. And then I saw Rachael motion to my purse and start to say something like “Shelly has something for you and it’s not leftover sushi.” I pulled out Confessions (complete with promo bookmark!) and gave it to her.

She took it graciously, flipped it over, complimented my overly photoshopped photo, and then proclaimed her husband to have been “huge into D&D.” (Which by the way, I totally knew from the way she describes him! It’s like reading a report from Market Research.)

And then there were more niceties exchanged, she thanked us for coming and we were ushered away. I’m pretty sure I’m not managing to get across how nice and sweet and funny and down to Earth and gracious she was. PHEW! Such a let down when that’s not the case (and I’m talking to you John Irving!) I was all blissed out on the way home. I met my favorite author! And she’s not a douchebag! Thank you, Jen for being nice. Even if you do throw my book in the hotel recycling.

Sadly I think everyone has  a story about meeting someone they admired only to discover that person was a jackhole. What is wrong with people? Yeah I get it. Being on the road, touring, meeting throngs of fans night after night is hard work. I’m not being facetious either. I work with authors as part of my real job. R.A. Salvatore loves meeting his fans but man– as his publisher, we put him through the ringer. But these people come out to see you. They’re the reason for your success. The least you can do is put on a smiling face and say thank you.

And then when you get back to the hotel room flip over a table and call your publisher a hoowah.

*look closely in this picture. Can you see my leftover sushi? 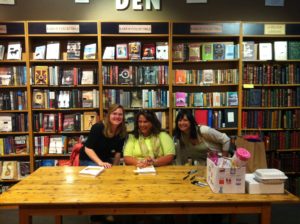