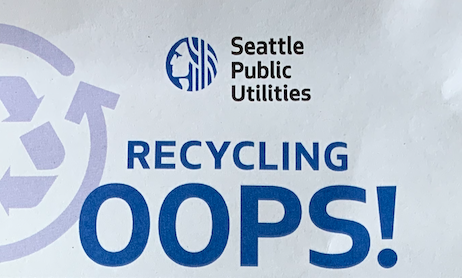 Today I finally lost it.

I was nearly gone for good, my friends. Put on the curb like the recycling that nearly did me in. But unlike recycling, I wouldn’t return as a cute pair of flats or trendy water bottle all the hip, young millennials in your hot yoga class carry. So really I was like garbage. Whatever. I’ve been called worse.

When you spend a lot of time at home and have almost every provision delivered, cardboard adds up. Couple that with a much needed dopamine rush found by online shopping and the procurement of new patio furniture and 57 outdoor pillows and you have more boxes than a Hammacher Schlemmer crossword puzzle. This should surprise no one, especially Seattle Public Utilities waste management professionals.

On the eve of recycling day, I lugged all my boxes to the curb, even broke down a few of them. Then took the biggest box– the one the new gray strap accent chairs came fully assembled in–and loaded it with the (mostly) broken down boxes. I was quite satisfied with my work.

As recycling day drew to a close, I noticed something odd. My boxes were still on the curb. The neighbors’ bins were back in their driveways signaling something very bad had happened: The recycling truck came and went, leaving my pile of boxes behind!

What in the helliest of hells was going on?

I ran outside to find a disturbing note taped to the blue recycling bin.

Uhh, okay. But what’s the oops? Buying furniture from a national chain retailer instead of a local outdoor furniture purveyor? In these times? Yeah, I feel bad about that too, but it’s hardly Seattle Public Utilities business.

On the back of the slip someone wrote: BOXES ARE TOO BIG.

Well, of course they’re big! Fully assembled furniture came in these boxes! FINE. Maybe I could have broken all of them down. Whatever. So, I lugged all the cardboard back to my driveway. In the two weeks between collections more dopamine was chased and therefore more cardboard procured. It’s a vicious cycle.

On the eve of my next pick up, I went back outside with an old pair of craft scissors and tore apart the boxes. Bart came to help, but all I did was yell at him for NOT MAKING THE CARDBOARD SMALL ENOUGH or putting a MEDIUM SIZE PIECE OF CARDBOARD IN A LARGE PIECE OF CARDBOARD STACK. There’s a method here! Any civilized, environmentally conscious person could see that! I stacked the cardboard into neat piles and surrounded it with paper grocery bags filled with Lunchables boxes, White Claw empties, and wine bottles that couldn’t fit in the bin, but I really needed disposed of lest my neighbors judge the goings-on inside our house. It looked quite nice, I thought.

One plus to working from home is that I could stare out the window for four hours waiting for my pick-up. The blue truck rolled up just as Chip and Joanna were about to show the Pepper family the big reveal on the Plain Jane House. I threw down my soy bacon and toast sandwich and ran out the door just as I witnessed the driver rip a piece of paper from a pad and stick it to my can. Oh, HELLS TO THE ABSOLUTE NO. I went thumping down the porch steps in my PJs (no bra, so sorry, Mom, but bras are for people with purpose) and asked what was going on. (Maybe I ran down the steps screaming, “NO NO NO NO NO!” I’m just capturing the essence of our conversation here.)

In lieu of answering with his voice the driver pointed to the Oops slip and headed back to the truck.

“No! No oops! I broke down all the boxes. You said they were too big so I made them small! I made them nice for you!”

Again, instead of using a voice, he pointed to a highlighted bit on the Oops slip.

“I did that! They’re flattened! LOOK!”

Resigned to having to use his big boy voice, he mumbled, “Not bundled.”

Well, that’s new and I told him so. I never heard nothing about bundles!

“What do I bundle them with?” I asked. “Ribbon? Shoelaces? The intestinal lining of a golden goose? WHAT MORE DO YOU WANT FROM ME???”

He shrugged. “Don’t know. But I”m not taking them. I told you last time to bundle them.”

Look, friends. I know for a fact that he never mentioned bundles because I anguished over that goddamn Oops note. You see, clutter and disorder is a major anxiety trigger for me and I’m all stocked up on triggers right now. Every time I looked out the window and saw the literal trash piling up around my car, my chest tightened and my palms started to sweat. I lost sleep over those boxes. If the first Oops note said rub organic oatmeal and fur from a prize lineage Pomeranian on seventeen rocks and create a protective stone circle around your cardboard I would’t have batted an eye. That shit would done. No questions asked.

Then this lying ass-can put his hand up signaling we were done with this conversation, walked back to his truck, drove it nineteen inches to my neighbor’s curb, and resumed operations. Look, I’m not trying to throw anyone under the bus here, but her boxes weren’t flattened or bundled so…

I may or may not have ran up and down the sidewalk, in my PJs, braless, shouting expletives. I really don’t know because I think my rage caused a black out. When I came to I was frantically shouting REPRESENTATIVE into my phone, trying to reach someone at Seattle Public Utilities. When I ran back outside to get the Oops slip for reference, I bumped into the kind, considerate gentleman who collects the garbage. He was as confused as I was.

“Why didn’t he take your stuff?” he asked, watching the big, blue truck amble nineteen inches every twenty-three seconds down the street.

“BUNDLED! BOXES! SO MEAN!” And I told this kind, befuddled man the whole sordid tale dating back two weeks.

“That’s not right,” he said, pulling out his cell phone, “Not right at all. I’m calling our team lead.”

And my god, you’ve been reading so long already I should really wrap this up, but this heroic man deserves his due! He hung up the phone, looked me in the eye, and said, “It’s done.”

Did I hug him? Did I rush into his arms? Did I kiss his wedding ring? No, but I thought about it. Maybe I would have if I was wearing a bra and my son wasn’t watching from our bedroom window. Instead I very stoically stood on the sidewalk and said, “I will be ready.”

I spent the next forty minutes tearing apart the garage looking for twine and then sorting and stacking cardboard into beautiful stacks reminiscent of French bakery bundles.

Forty-five minutes later another truck pulled up. This must be what a lost hiker on a mountaintop feels upon seeing a rescue chopper on the horizon. I ran outside once more ready to chain myself to the tires if these boxes weren’t headed for a pulping machine in the next five minutes.

“I’m sorry this didn’t get picked up earlier,” the man said. “That guy is lazy.” He shook is head in disgust. Clearly this was not the first complaint on is route.

“Even bundled, he’d complain they were too heavy. What a jerk.”

Did I take immense pleasure in that man’s colleagues ripping apart his work ethic? Of course! Am I excited to be working from home two weeks from now to ensure my nemesis doesn’t employ any retaliatory actions? You bet! Do I hope the blue truck rolls up at the same time my new best friend arrives so I can stand on the porch in PJs and shout, “George, it’s so good to see you again! Did you and Marissa enjoy the homemade chocolate bundt cake? Don’t forget to empty, clean, and dry that case of champagne before tossing it in your blue bin!” Umm, yeah, a little. Because of course George will be rewarded. I might even put on a bra.