No, don’t take a rest–I’m talking about the candy bar. Have you had one? They are simply the greatest candy bars to ever roam this fine Earth. Chocolate, peanut butter, pretzel, caramel and peanuts. I know, right? It’s like I created it! Anyway, I indulged in a few of those fun size ones on Friday when we were playing D&D. I’m a stress eater and that game was very stressful. OMG they are so good. I regret nothing. 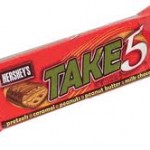 But I digress. Sort of. I was thinking about Halloween because… well…it was yesterday. We celebrated on Friday. Here we are in our store-bought costumes purchased 64 hours before we wore them. 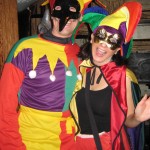 I had no idea we looked scary until my Facebook friends told me so.

Ew! You’re creepy clowns! You’re awful! I can’t look at you! Go away!

I have been reminiscing about Halloweens of Yore. Here are some random memories:

Note to any future kids: Your Halloween costumes will suck. Mommy, like Grandma, is not crafty. Sorry in advance. But Mommy promises to throw lots of money at the problem and buy you whatever accoutrements you need to not be a total embarrassment. You see, Mommy is lots of things. She can bake you a giant cupcake for your birthday, pick out the perfect prom dress accessories, give all of your stuffed animals voices and sordid backstories. But Mommy can’t sew. Or even glue very well. If buttons fall off your pants then we have to throw them out. That’s life. Deal.

Back to reality. I like Halloween but I don’t like the pressure that comes from wanting to have a cool costume. Back in my day we didn’t have good store-bought options and we sure didn’t have all those crafty mavens on Etsy.com. Sure there were those plastic death trap masks that made you look less like Wonder Woman and more like a blow up doll. And the pants that were made of the same thin vinyl that dumpy hotel shower curtain liners are made out of. Remember those? Incidentally Bart just told me this hysterical story about going to school as Darth Vader when he was in grammar school and splitting his pants right in the crotch. Worst thing that ever happened to him. (And by him, I mean Darth Vader.)

This probably won’t come as a surprise to you but, at work they go gangbusters for Halloween. Very elaborate costumes and stage make-up. Every department gets a budget to decorate. There’s usually a theme. This year my department was “Clue” complete with a murder mystery and everything. My boss and I however, planned our costumes before the department came up with their theme. 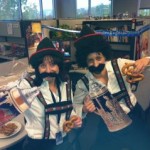 We figured the Clue Mansion had room for a couple of weary Bavarian travelers. My costume lasted for about 1 hour and 14 minutes before I got icked out and had to change. Lederhosen, when made of all synthetic materials, are not very comfortable.

And here is the Sales department with their winning design: 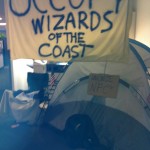 Last night we took Sadie for a walk and got giggly watching all the Trick-or-Treaters. What a strange tradition.

“Kids! Disguise yourselves, knock on stranger’s doors and demand candy!”

“Adults! Open your doors to gaggles of oddly dressed small strangers and give them overpriced pieces of candy!”

Candy, I learned from Facebook this morning, their parents will end up eating. I can’t imagine my mom sneaking under my bed when I was asleep and swiping my M&M’s and Butterfingers. The candy I worked so hard pounding the pavement for! But she did. I know she did. She just didn’t have Facebook to brag about it.

Anyway, Bart and I were laughing at how all these years later you still have kids dressed up as Princess Leia and Batman. We also saw a great Gandalf and Froddo, a lady bug, Iron Man, random princess, and my favorite– Superman. Only this Superman was extra super because he wore a beautiful blue and red mask (Batman-like) bedazzeled with a beautiful sequined “S.”

“Superman doesn’t wear a mask,” Bart sneered, thankfully out of earshot of the fabulous Superman.

Clearly the kid wanted to be Superman and clearly he desired a mask. Lucky for him, his mom is the crafty type and probably whipped it up right after dinner. Is that so wrong? It’s Halloween, a night of fantasy. If Superman wants a mask he gets one. It’s moments like that one that stay with me. If I were to one day be someone’s parent, I hope I’m the kind that grants Superman a mask. I probably won’t make said mask, (because I want my kid to like me) but I will at least know who to pay to make one. And then I will probably smudge some dirt on his cheeks because no costume is complete without it.

One Reply to “Take Five”